Most of us have been to a cemetery, probably to attend the burial ceremony of a family member or close friend. But how many of us have strolled more leisurely through a cemetery to see what tombstones can tell us about a community’s history? Cementerio El Encinal, operated by the City of Monterey, reveals much about the Japanese community in Monterey.

As a final resting place, cemeteries have a long and varied history extending back in time more than five centuries. Tribes and communities have long honored their dead, sometimes by placing skeletal remains in a burial site known as an ossuary, such as a cave or vaulted space. In more modern times, a cemetery defines an area of land where dead bodies are buried in the ground or cremated remains are inurned in a columbarium. Some communities may honor their dead by erecting a cenotaph, such as the one in Hiroshima’s Peace Park, absent actual human remains that lie elsewhere.

Monterey’s Cementerio El Encinal is the resting place for many of the community’s Japanese population. The cemetery is located on a 10-acre parcel of land bordered by Camino Aguajito to the east, Fremont St. to the south, and Pearl St. to the north. This land was deeded to the City of Monterey in the early 1930s by the Roman Catholic Church. San Carlos cemetery, owned and operated by the local diocese, lies on 13.5 acres just to the west of Cementerio El Encinal.

Today, if you take the time to saunter around Cementerio El Encinal, you will see a fully lawned area with a scattered grove of oak trees (the approximate of the Spanish term, El Encinal), but in the 1930s it was all grassless, bare ground. No individual mausoleums or vertical standing headstones are allowed except for the few vertical headstones grandfathered in under old policies.

Regarding the local Japanese population, Cementerio El Encinal does tell us something about the early community members, diverse cultural values and practices, and perhaps social status. If you go the the south-east section of the cemetery, you will readily observe that the names of the buried are clustered into two Asian groups: Japanese names predominate on headstones in the most south-east corner of the cemetery (closer to Fremont St.) and Chinese names are grouped mainly just to the north of the Japanese. Other non-Asian names are dispersed throughout the cemetery.

Traditional values may be inferred by the use of kanji on a few of the Japanese headstones and written characters on some of the Chinese headstones. If the characters are carefully read, there may be a hint of religious preference as well. Variation in the size, quality, and engraving on headstones suggests subtle differences in social status.

In walking through the Japanese section of the cemetery, one is immediately struck by seeing a pantheon of founding and important members of Monterey’s Japanese community. Moving among the headstones, one notices familiar names of individuals and families who have made significant contributions to the history of the Monterey Peninsula.

Headstones tell us that the earliest born Japanese immigrants who came to Monterey were Kumahachi Inazu (b. 1860), Rokumatsu Ono (b. 1862) and Gennosuke Kodani (b. 1867), and Tomekichi Manaka (b. 1869). All four were born at the end of Tokugawa rule , just before the start of the Meiji era. R. Ono, G. Kodani and Tomekichi Manaka were prominent members of Monterey’s early fishing industry. Ono owned a fish chandlery store and Kodani pioneered the abalone business as co-owner with A.M. Allen of Point Lobos Canning Company. 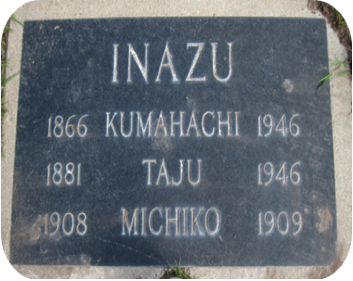 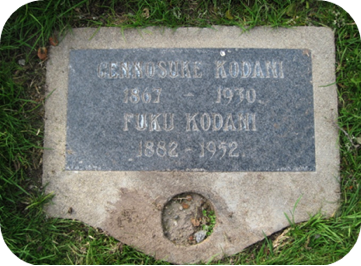 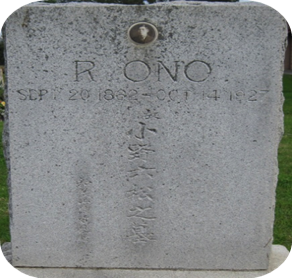 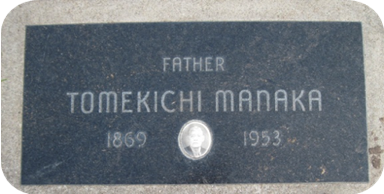 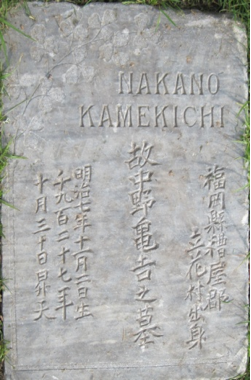 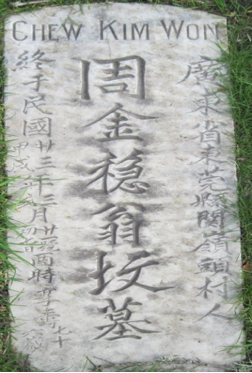 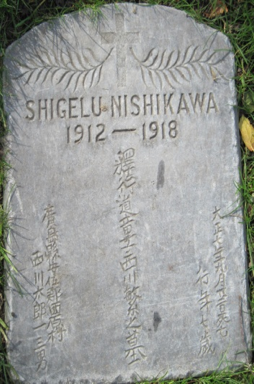 Some headstones are inscribed in Japanese kanji, suggesting a more traditional cultural preference at burial.  Another has a cross at the top (see Nishikawa) indicating a Christian burial.

One headstone shown inscribed in Chinese characters is surrounded by several other Chinese headstones.  Given the strong anti-Asian sentiment during the late 19th and early 20th century, these two clusters of Asian burial sites suggest that the Japanese and Chinese may have been racially segregated for burial purposes.

There is no evidence of a city policy of racial segregation, but there is a clear de facto pattern suggesting Monterey’s early Japanese either voluntarily chose this gravesite area or that prevailing attitudes in the larger community restricted burial sites for Chinese and Japanese in pre-WWII Monterey.

In 2010, Cementerio El Encinal presents a tranquil, park-like environment, overlooking Aguajito Lake to the east, with oak trees scattered across a 10-acre parcel of land. The dirt surface of the early 1930s is now totally resurfaced with grass and vehicle access lanes. Given population growth and limited space, the human need for burial and remembrance is being met, in the short term, by stacked ground interment, above-ground mausoleum interment, and columbariums for cremated remains. At some point in the near future, we may have to re-think how we honor and remember the departed.

Whether we stroll through our community cemeteries or rub pencil across paper on headstones to capture a memory, cemeteries can reveal interesting facets of community life. Some of the history of the Japanese on the Monterey Peninsula can be gleaned by walking through the south-east portion of Cementerio El Encinal. Cemeteries can speak their own unique language.